The True Cost is a 2015 documentary directed by a Los Angeles-based director, Andrew Morgan in association with Life is My Movie Entertainment (a documentary studio based in California and Georgia). It focuses on fast fashion and talks about the clothing industry, from production to its after-effects. As a matter of fact, Morgan associates it with globalization, oppression and poverty. 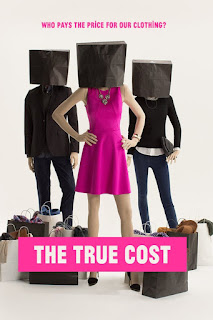 The True Cost wants to tell us the story of the clothes we wear, the people who make them and their impact on our world. The film starts back in the 60s, when the American fashion industry produced 95% of the clothes people wore. Over the past decades, this percentage has decreased a lot: only 3% of what American people wear is actually made in the US since the production is much cheaper in developing countries. Morgan shows us how people live in Bangladesh, where there are many clothing factories that produce the majority of the clothes sold in Europe and in the US. Bangladeshi, like Cambodian, Indian and Chinese workers,  have absolutely no rights and are not  even respected as human beings. They are forced to work in terrible conditions and in shaky buildings. The result is having habitual accidents or insurrections which lead to many deaths. In 2013, Rana Plaza (one of the most important Bangladeshi clothing factories) collapsed after workers were forced into the building even if a crack could be seen in the walls. The accident caused over 1000 deaths and 2500 injured people.

Have you ever wondered why a T-shirt or a pair of jeans sold by big brands doesn’t cost much? Because the worker who made them lives on a low salary and earns around 10$ a month. And with that wage, a family has to be supported. So how is it possible? In many cases, it just isn’t. Parents are often forced to leave their children to someone else who can afford the costs and raise the babies.

Another big problem is caused once again by American and European people since they very often buy clothes from big brands  and wear them only 6 times on average before throwing them away. In fact, every year over 73% of the total quantity of fast-fashion products is incinerated. Of course, rubbish should be disposed of, but since it costs much, waste is sent to developing countries. That’s why the banks of the river Ganges are so polluted. The high pollution rate also makes some areas uninhabitable and water is poisoned in many regions. So thousands of people are diagnosed with cancer or other deadly illnesses caused by pollution and the number of stillbirths is drastically increasing.

So has your wardrobe got an impact on our world? Yes, it has. How can you fix this? Well, there are many ways actually. First of all, you should start buying second hand or sustainable clothes and then just be careful about what you buy, how often you go shopping and especially from which brands you buy clothes. The documentary certainly changed our view about clothes (and hopefully yours will change too) we are  quite sure we will never buy anything from such big brands as Zara, H&M or Shein anymore,  and you? We can change all this and, even if it may imply a change of habits, would  be a very important step to make our society just a little bit fairer. So let’s end the fast-fashion season and remember this: the new is over.