Who are Joe Biden and Kamala Harris? 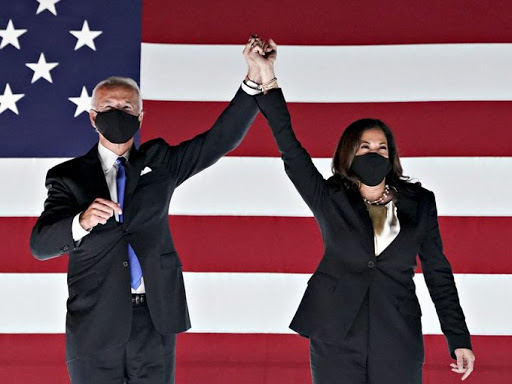 Joseph Robinette Biden, best known as Joe Biden, was born in Pennsylvania in 1942. He went into politics when he was very young. At the age of 30, he became Senator for the State of Delaware and represented the Democratic Party.
He was in office until his candidacy as vice president in 2008. He’s also worked as Chairman in many organs such as the Senate Foreign Relations Committee, the International Narcotics Control Caucus and more.
Between 2009 and 2017 he was vice president and worked with Obama who was, as you all know, the president-elect. This year, Biden faced a great challenge because at the beginning of the month, his victory wasn’t that sure. His opponent seemed to have the majority of the votes in many of the swing states (which are states that can be won by either the Democratic or the Republican presidential candidate by a swing of votes). Only in the last few days, Pennsylvania and Georgia "turned blue" and ensured the victory to Biden and his vice, Kamala Harris. This is great news, because she’s going to be the first woman in this office in the whole history of the United States. She also has black and Asian origins and this means a lot in the fight against racism which American people have been going through for a long  time. In 2019 she ran for the 2020 Democratic presidential nomination and she was announced to be Biden’s running mate on August 11th. In 2016 She became a member  of the United States Senate and she gained fame by questioning more than once the Trump administration during the open Senate's hearing. She wasn’t the only one with the political experience to run side by side with Biden, once he nominated her he said and I quote: "A fearless fighter and one of the country's finest public servants". He wasn’t the only one who spent kind words after her election, Barack Obama tweeted: "She is more than prepared for the job. She's spent her career defending our Constitution and fighting for folks who need a fair shake." After finding out that they had been elected as President and Vice president she immediately called Joe addressing him with the well-deserved phrase "We did it" and the video went straight viral.

What will Biden and Harris do once they are in office? During their campaign, they promised to change many things actually. First of all, they want to introduce stricter rules in order to deal with COVID-19 and that’s why Biden strongly criticized Trump’s approach against the  pandemic. They also want to make future vaccinations and swabs free for everyone. This decision is in line with the Obamacare, proposed by Obama during his term as president and of course supported by Biden. As Donald Trump would have done, they’ll raise the minimum wage to 15 dollars per hour and withdraw American troops from Afghanistan, ending a mission which has been going on for over 20 years now. Biden and Harris want to make a big difference in the United States history by ending death penalty, which is still present in more than 10 states. They both support the BLM (Black Lives Matter) and the LGBTQ+ community so they’ll act in favour of these minorities. Biden said he would keep gay marriages legal and guarantee freedom of choice about abortion. The new president and his vice aim to be part of the Paris Agreement again and to be carbon-neutral by 2050. Will they be able to do all this? We strongly hope so because the U.S have been going through some hard times lately. Now we just have to wish good luck to both of them and hope they’ll be good leaders for the American people.