Veganism and vegetarianism: an hard choice for a good reason

Are there any health benefits to going vegan or vegetarian? Is it good for the other species? Why do many people think it isn’t necessary or healthy? As you probably know, the discussion between pro and anti vegan has been a hot topic over  the last few years and we would like  to explain you why this may be an optimal choice to protect our world and future generations. 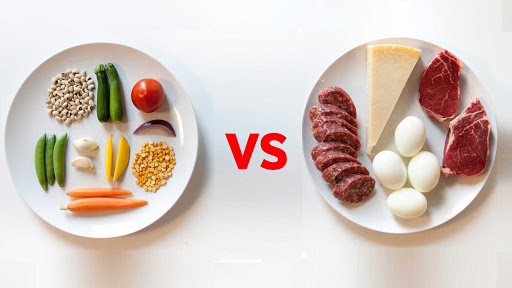 First of all, do you know the difference between these two particular diets? A vegan is a person who avoids eating animal-based food (such as meat, but also dairy products, eggs and honey), while a vegetarian doesn’t eat meat and fish but he/she is potentially used to consuming  other animal products.

We all agree that being vegan or vegetarian is not always easy, that’s a fact of life. We are typically quite methodical and changing our habits can be very hard sometimes. But this is an effort we all should make because it could really change the world. As a matter of fact, meat production is one of the most devastating human activities ever because it causes pollution, deforestation, massive water consumption, a serious loss of biodiversity and climate change. Every year, 70% of global cereal production is used to feed the animals in  meat industries, so if we all were vegans or vegetarians we would be able to limit the impact of agriculture because it would be enough to grow 50% of what we farm now. Also, a kilo of meat is equivalent to 60 kilos of CO2 and - as you may imagine - it has terrible consequences on the environment. We also should think about the water wastage resulting from this huge production: industries make use of ⅓ of global freshwater resources annually for their livestocks and if we replaced a kilo of meat with one of vegetables in our diets, we would save 15,000 litres of water. Considering the fact that every Italian citizen eats on average 78 kilos of meat every year, Italy, by stopping this consumption, would save 7,020,000,000,000,000 litres yearly. Italy alone would do that. Also, meat is not as healthy as you probably think. According to some research conducted by the Institute for Public Health and Medicine at Northwestern University in Chicago, consuming red or processed meat two or more times a week increases the risk of heart diseases and mortality.

So as you can see, going vegan or vegetarian has a ton of advantages, but we also want to talk about the dark side of these diets. A study conducted in 2011 revealed that our brain is bigger and more complex than in other species because of the diet our ancestors had (and meat was a very important part of it). As a matter of fact, our brain devours about 20% of our daily calories and meat is probably the best option to find an enormous array of fats, amino acids, vitamins and minerals in only one product. Also, a vegan diet may not be as healthy as it seems if it isn’t followed properly. Eating this way means that not everything can be replaced: there would be some lack of vitamins such as B12, essential to the formation of red blood cells, and Omega-3, acids that play an important role when it comes to human diet.

Because of this deficiency, not everyone can actually endure a vegan or vegetarian lifestyle

and this is surely a big stumbling block in the discussion between pro and anti vegan. Finally, plant-based agriculture still causes harm to animals. The modern methods of agriculture and harvesting plants result in killing  lots of mice and rodents, for example. In fact, even if there is a big categorical difference between industries that necessarily imply the suffering (or death) of animals and industries where that suffering (or death) is not inherently required but instead is related to the means of implementing that process, harm and death are an integral  part of animal agriculture. It would be necessary to halt the whole agriculture system to totally stop the suffering of different species.

Everyone must absolutely feel free to eat meat or not because going vegan or vegetarian is surely a personal decision that we all have to make on our own. But the most important thing is to be informed about the consequences of our actions in order to decide in the most responsible way possible.