The psychology of climbing

Climbing is quite a particular sport. As a matter of fact, it is mostly about failure, since climbers spend most of their time falling in the gym. In most sports, falling is the emblem of failure, but in climbing, it is what makes athletes even more enthusiastic and willing to be successful because they are motivated by that. I reckon it is quite curious that as the rate of failure goes up, so does the joy and the thrill of the success. So, the thing that sustains climbers is actually the quest, the hope and expectation that the falling will be worth it.

Whilst falling is an important part of the process for climbers, on the other hand it is also what mostly scares athletes. In many cases, people’s full climbing potential is not reached because of their fear of falling. Climbers often hesitate to make a move because they think they might fall off or, even worse, they make a lame attempt to go for a hold because their brain has already unwillingly decided that they will fall.

Before talking about how we can deal with this counterproductive feeling, let’s see what exactly happens in our body when we get scared. Fear always starts with a trigger, a threat which can be both imagined or real. Then, a signal is sent to Amygdala, which is located in the temporal lobe and which is part of the limbic system. It is responsible for emotional responses, especially associated with fear, and for our prehistoric survival instincts. After that, specific neurotransmitters, called glutamate, send signals deeper into the brain and, for example, these can make us freeze. In the meantime, the body floods with adrenaline, so heart rate and blood pressure go up. Also, blood is pumped to the  muscles that get ready for a fight or, in climbing, for a flight. This process can surely influence our efficiency in climbing, making us insecure and just unable to climb well and relaxed.

There are many ways to reduce the impact that fear can have on our body as we are climbing and all athletes have their own. Many think that yoga helps a lot, while others prefer listening to music before the climb. Experts usually recommend visualization, breathing and positive self-talk.

Visualization is extremely important, even if it is often underestimated. By visualizing the moves and the holds, we can reduce the mental noise that is usually present  during climbing since the mental rehearsal of visualization equates to having climbed the route. Breathing regularly is essential, too. It helps with energy conservation, muscle relaxation and it also slows down the heart rate. Finally, positive self-talk is very useful to remain calm and prevent the fear from taking over. Since fear is an irrational feeling most of the time, using a positive self-talk can be really helpful to stay focused on our performance. 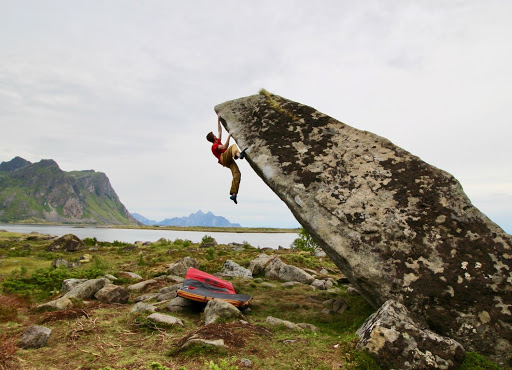 In conclusion, here is the thought of Simon Thompson, climber and writer, who published in 2010 his book called Unjustifiable Risk? The story of British climbing:  “Almost regardless of their absolute level of achievement, when climbers operate at their personal limit they experience an emotional intensity, both elation and despondency, that exceeds all but the most ecstatic and traumatic events in ordinary life.  During a climb all mental noise, all distractions, are eliminated and the mind focuses solely on the flow of climbing.  For a short period of time all of the cares and concerns of the world disappear and all that is left is the climber and the mountain.  The experience is so vivid and taut that ordinary life can feel grey and flaccid in comparison.”